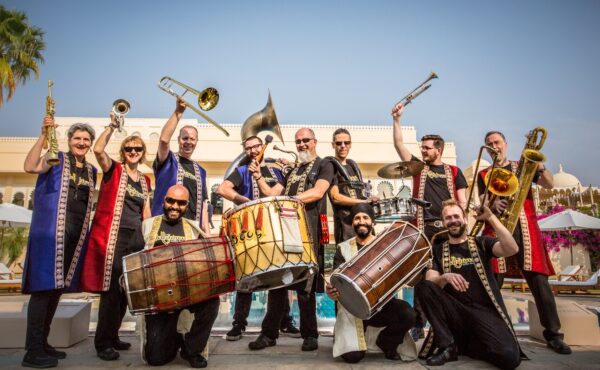 Twice nominated for Songlines World Music Awards, the band has performed all over the world… in venues, at festivals, and for Indian weddings in the UK, Norway, India, Thailand and South Africa. The Bollywood Brass Band is versatile, playing both amplified stage sets and in a street formation, and they are equally at home headlining a festival or delivering exciting workshops in schools.

In recent years they have worked with exceptional talents such as singer Rafaqat Ali Khan and Carnatic Violinist Jyotsn a Srikanth on several releases and performances, in conjunction with institutions such as Arts Council England and PRS Foundation’s Women Make Music.

With brass, saxophone, dhol drums and a colossal sousaphone, the Bollywood Brass Band is one of the most colourful, joyful and exhilarating acts around.